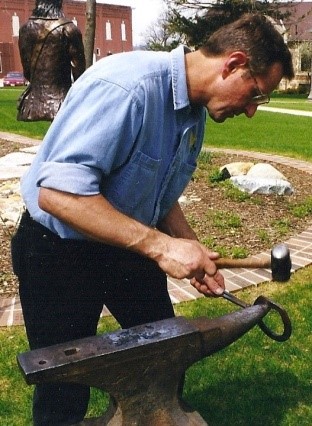 My farrier career story is of one less traveled.  Except for the first couple of years and the last five years, I have always worked another full-time job, most of which was in the military.  Horses have been a lifelong passion and the desire to have more horses than I could afford is what originally prompted my career as a farrier.  I could work with a multitude of horses and get paid to do so, feeding my horse obsession.  I trimmed my first horse when I was thirteen in 1965.  After a couple years in the U.S. Army as a Combat Medic and graduating from Iowa State University with a degree in Animal Science in 1976, I was working as a cowhand for a large cattle operation.  It was there in 1977 that I read a small book on how to shoe horses, bought some cheap tools, and for better or worse, I shod my own horse that I used on the ranch.

It was on this cattle ranch that I learned to artificially inseminate cattle, which led to a career with Midwest Breeders Cooperative, where I professionally inseminated cattle for eleven years.  I began as a relief technician until I was given an area in Montezuma, Iowa.  From there I became a bull semen salesman for Western Iowa and ultimately was promoted to District Sales Manager in St. Cloud, Minnesota, where I had the responsibility for twenty-two technicians in my district.

Although I enjoyed cattle insemination, I did not enjoy the extensive travel involved as a manager, so I made the decision in 1985 to resign and enrolled in Richard Duggan’s Minnesota School of Horseshoeing and Blacksmithing in Anoka, Minnesota for twelve weeks.  I then apprenticed for a couple of months with two Minnesota farriers, Keith Raleigh and Randy Bush, and then moved back to Iowa to the small town of Coon Rapids.

I thought I knew everything about shoeing horses until the first horse I shod for my first customer.  That is when I realized I didn’t know a fraction of what I would need to know to be a successful farrier.  I struggled for a year, and fell back on my prior military service and joined the Iowa Air National Guard as a Medical Technician.  I was offered a full-time position with the 132d TAC Hospital, which became my primary career.  I continued to shoe horses nights and weekends until my retirement in 2009.  Shoeing became my primary job following military retirement while I also did some substitute teaching and coaching for local schools.

I really felt I had the best of both worlds as I served the country and fed my horse passion.  I retired as a Chief Master Sergeant from the military after serving during the Vietnam, Gulf, and Iraqi Wars.  As a Combat Medic in a QRF(Quick Reaction Force), I was on a plane to Vietnam, but the mission was canceled and we returned to station.  During the Gulf War, I was sent to Shaw AFB to help man a military hospital and during the Iraqi War, I and my Commander, led a team of medical personnel to man the hospital in Landstuhl, Germany, treating casualties that were air evacuated from the battlefield in Iraq and other surrounding conflicts.  I was never so proud to be an American as I was while in Germany.  To the man, the soldiers being treated there with horrendous injuries, said to us, “Patch me up Doc, I need to get back, my buddies need me.”  I was also fortunate to participate in training and humanitarian missions to numerous locations including Japan, Guatemala, Panama, Puerto Rico and Hawaii.  Over time, if you remain in the military, you receive various recognition awards, but there are two that mean the most to me:  The Expert Field Medical Badge, which is a grueling contest, where only 10% succeed in a test of combat medical skills, compass orienteering and a twelve mile run in seventy pounds of field gear, including weapon;  the other was the James D. Weaver Award, which I was awarded in 2004 as the National Medical Technician of the Year.  I was credited with the development of the “Frequent Deployer Program”, which streamlined the accomplishment of medical requirements, allowing the Iowa unit to become the first medically war ready unit in the country, following the increased “Ops Tempo” after the events of 9/11.  The program became the gold standard and continues to this day.  I may have created the program, but I give all the credit to the Leadership and the outstanding Medical Team of the Iowa Air National Guard, whose “Can Do” attitude accomplished what was previously considered impossible.

It wasn’t until the late ’80s, early ’90s when I heard of the Iowa Professional Farriers Association(IPFA) and attended my first clinic at Bob Urich’s stable.  I was in awe of the skills and kindness of the members of this association.  Ray Legel, as he has for over thirty years, was the first to greet and welcome me.  It was that day that Dick Harris showed me how to apply Drill-Tek, which singlehandedly put me on the map in my area, as no one else in the area could do so at the time.  Word spread rapidly and my floundering farrier business, suddenly had me busy and appreciated.  I pale in comparison to the amazing farriers I have met through the IPFA, but I have learned from each and every person I have met over these many years.  I would not have passed certification if not for LeRoy Calvert, who was there with me every step of the way.  I have always been humbled in the presence of the members of this association, but I have served as a Director, Vice President and President.  Not feeling worthy, but rather, feeling honored to be able to give back in some small way to the members of this organization who have given so freely of their talents and friendship to me.  I would never have dreamt that the founding Honorary Members of the IPFA, who have given so much to build and grow this organization, would honor me as the first non-founding Honorary Lifetime Member of the IPFA in October of 2015.

In 2014, my body told me it was time to slow down, so I have shifted gears more to training horses, while still trimming and shoeing horses that I train and others that horse owners are willing to bring to my shop.  I truly enjoy training horses that have been considered problem horses, as my least favorite thing in shoeing has been having to work with misbehaved horses, knowing that they are just spoiled and disrespectful, which can be easily fixed with the time that I now have, but did not have while on the road shoeing.  What I have enjoyed the most about shoeing, has been the opportunity to learn and love all things equine in this occupation, where learning never ends and you realize that the more you know, the more you realize how much you don’t know.

I am honored to be asked to submit my story.  I am proud to be among the farrier community and particularly the IPFA.  I continue to admire and I am fascinated by the drive, work ethic, and skills that a farrier must possess and through the IPFA I have been privileged to know some of the very best.