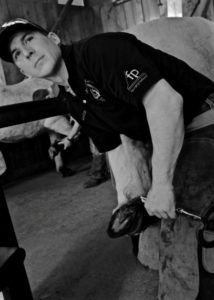 Joe Nygren CJF DWCF graduated from Heartland horseshoeing school in 2007 and started shoeing horses full time. In 2009 he earned his certified and journeyman through the AFA. In 2010 he received the AFJ Rising Shoeing Star award and was a farrier for the World Equestrian Games.  Joe has been competing with the World Championship Blacksmiths since 2009 with 2 top 10 year end finishes. Joe has competed at the Calgary Stampede, AFA Convention and World Horseshoeing Classic numerous times.  Joe realized success as a current member of the American Farrier Team for the second time. Joe considers it an honor and highlight of his career to travel the world representing the USA and AFA as an ambassador for the farrier industry.

Joe lives in Pulaski, WI with his wife of 12 years Tammy and 4 children Lily, Ellie, Kaylie and Lane.  Joe’s life is consumed by the farrier industry and furthering education. While running a successful farrier business by day he spends most of his nights in the shop practicing for the next competition.